The number of million-dollar homes being sold increased from the previous year’s quarter, there were 51 homes sold for $1 million or more since January this year versus 42 during the first quarter of 2021, which correlates to the increase we see in the median. The median sold price for the first quarter of 2022 was $369,700, an increase of 8 percent from last year ($340,000).

Sales continue to outpace new supply. The MLS recorded an average inventory of 250 for the month of March. As of April 11th, there were 245 homes listed for sale in the four-county area. Homes that sold during March were on the market for a median of only 47 days.

LAND SALES. REALTORS® have sold 368 tracts of land worth $54.4 million during the first quarter of this year, which is relatable to the activity they recorded last year when they sold 369 tracts for $34.6 million. High Country REALTORS® in our four-county region sold 121 land listings in March 2022, which totaled over $18 million. ALLEGHANY COUNTY: In March REALTORS® sold 17 land listings for $1.7 million. ASHE COUNTY Realtors® sold 34 properties totaling over $3.6 million. AVERY COUNTY: Realtors® sold 30 land listings which totaled over $5.5 million. WATAUGA COUNTY: Realtors® recorded 40 properties selling for over $7.2 million total in the month of March.

COMMERCIAL SALES. REALTORS® in Alleghany, Ashe, Avery, and Watauga have sold 10 commercial listings for $5.7 million in the first quarter of this year. 2 Commercial sales were recorded in March totaling $1.3 million, which were sold in Ashe and Watauga counties.

INTEREST RATES. The average 30-year fixed rate is on the rise, hitting 3.18 percent as of April 7. The information posted online per Freddie Mac indicates “Mortgage rates have increased 1.5 percentage points over the last three months alone, the fastest three-month rise since May of 1994. The increase in mortgage rates has softened purchase activity such that the monthly payment for those looking to buy a home has risen by at least 20 percent from a year ago.”

Report graphics generated from Domus Analytics pulled from the HCAR RETS feed. HCAR Realtor® members can access these detailed and customizable reports and graphics for professional use by logging into the HCAR dashboard - Info Hub and clicking on the Resources tab, then the HCAR stats link. A public graphic is available on our website homepage at highcountryrealtors.org. 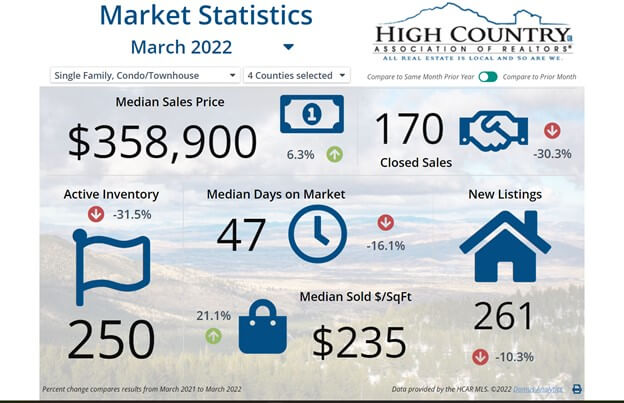 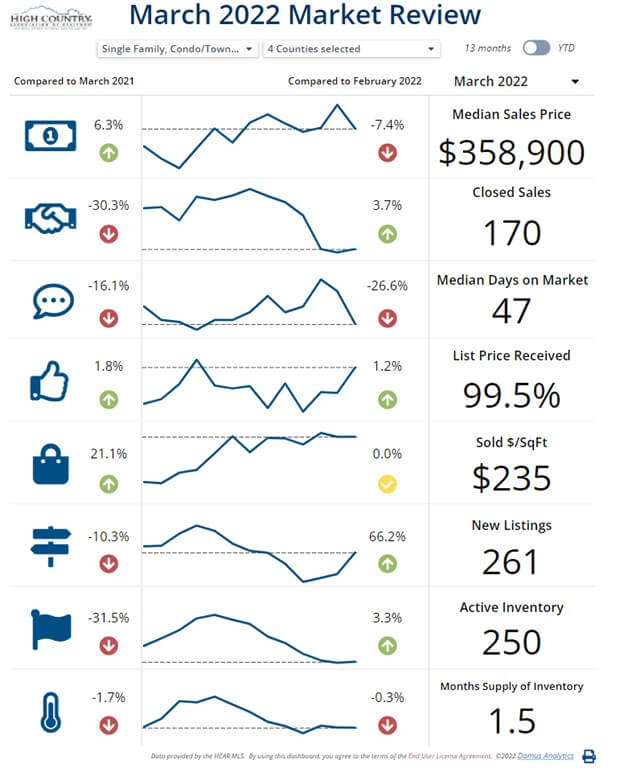