The 2021 MLS Market Report for the High Country Association of Realtors® saw agents finish out the year with records in sales volume and some comparable numbers to the historical totals we saw in 2020.

Professionals in the High Country MLS sold a total of 3,222 residential listings worth $1.43 billion by the year’s end. Home sales volume totaled $1.18 billion the previous year. The High Country MLS records for 2020 reported 3,269 total residential properties sold. The number of High Country homes sold was down a mere 1.4 percent this year from 2020, however the sales value was up 20 percent, a pattern noted across the US according to the Federal Housing Finance Agency. The agency also stated that the price increase accounted for the largest annual home price increase in the history of the agency’s House Price Index.

High Country Realtor® and MLS past president, Shy Fecteau explains the year from a professional’s point of view; "We thought it couldn't get any more challenging than 2020, but as we entered an even stronger seller's market in 2021, High Country Realtors® had to work harder than ever to bring their buyers to closing. That is evident by our sales volume and number of home sales, despite the continuing decline in inventory month over month."

September of 2021 saw buyers scoop 305 homes off the market, the most in one month recorded all year. The high mark for home sales last year was recorded at 440 homes sold in September of 2020. At the markets low mark, in February we saw a meager 183 homes sold. The lowest number recorded since April the year prior, which saw only 130 homes sold.

INVENTORY:  As of January 10, there were 289 homes for sale in the four-county area, compared to January 6 last year, there were 496 homes for sale. With that comparison, we see nearly a 42 percent decrease in inventory from the previous year.

To close out the year, there were 3 commercial properties sold in December. Two were in Watauga County for a combined $709,000. There was one in Ashe County for $535,000.

In the final month of the year, Alleghany Realtors® sold 20 homes worth $5.4 million.

There were 42 homes sold for $17 million in December. 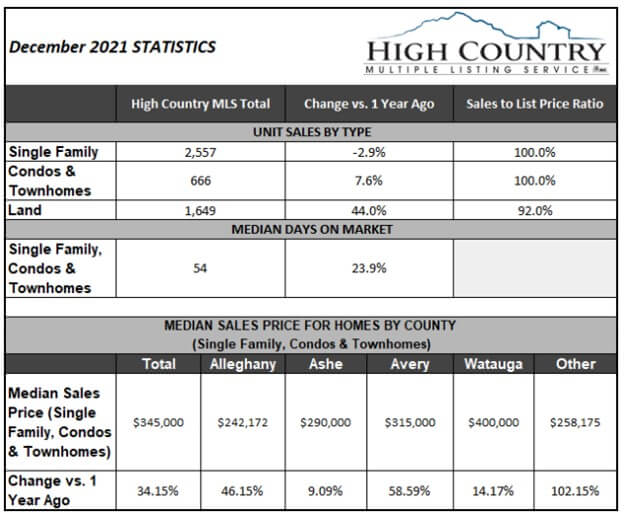