REALTORS® are welcoming the summer selling season and the High Country is still bustling with buyers. Unit sales total 1,500 homes sold this year, with June accounting for 287 of those sales.

Last month most homes sold in less than 60 days of the list date. The High Country MLS reports the median sold date within 44 days of being on the market. It is evident that buyers are looking for homes quickly, which increases the demand for inventory.

This inventory decrease is the same across the country, The National Association of Realtors® released research in early June, which was collected from the Rosen Consulting Group, estimating that between 5.5 million and 6.8 million new construction houses are needed to meet the demand across the nation.

High Country property owners, and those looking to buy, are seeing the effects of the current Seller’s Market. Our MLS data reports that out of the 287 homes that sold in June, the median sold price was $330,000. When comparing that number to June of 2020’s median sold price, which was recorded at $247,000, we see an increase of over $80,000.

On top of that increase, we are also seeing Seller’s receive an average of 99% of asking price.

With the High Country seeing such impressive numbers, it is also notable to report the demand for homes in the multimillion-dollar range.

So far 2021 has seen the sale of 76 High Country homes between 1 million and 7.2 million dollars. Last month alone accounted for 18 of those million-dollar home sales, the same number of sales we saw in May of this year.

LAND: Our MLS recorded a few less properties sold compared to May, however we saw a slight increase in the sold price. In Alleghany, Ashe, Avery, and Watauga there were 130 tracts of land that sold for a combined total of nearly $19.5 million in June.

Most of the property sold was the 49 tracts in Watauga County for $8.6 million. Ashe County recorded the second most land sold with 25 tracts that brought in over $1.9 million. Avery County followed with 25 tracts selling for over $4 million and Alleghany recording 13 tracts that sold for a little over $2 million.

ALLEGHANY COUNTY: June saw 29 homes sold in Alleghany County for $7.36 million. The median sold price for those properties was $285,000.

AVERY COUNTY: There were 57 homes in Avery County that brought in a total of nearly $27 million. $270,000 was the median selling price for those properties.

INTEREST RATES: We are still seeing low interest rates on 30-year mortgages. Referencing Freddie Mac, the average interest rate for July is 2.98% as of July 7, 2021. 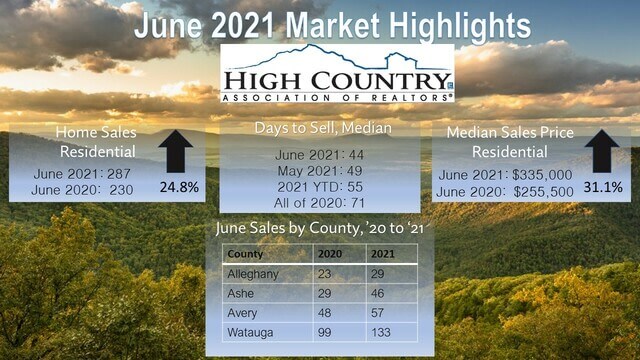 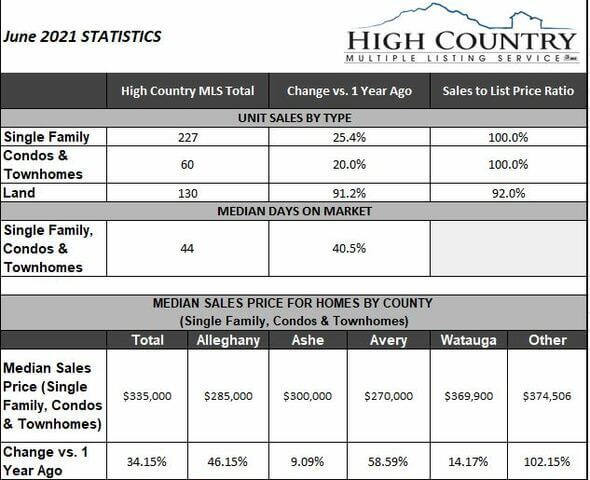