Overall unit sales for the year so far - 2,213 - exceeded annual sales recorded for each year from 2007 to 2017. It’s also 85 percent of sales recorded the entirety of last year, as recorded within the High Country Multiple Listing Service (MLS). It tracks all REALTOR® transactions in Alleghany, Ashe, Avery and Watauga counties.

To further emphasize buyer demand, since May, High Country homes have sold for 96 percent of their original listing price. In Watauga County alone the ratio is just over 97 percent.

INVENTORY. The record pace of purchases has dropped the active inventory of homes for sale to about 680 as of October 4. That’s the lowest inventory recorded in years.

There were 385 new listings added in September, after another 414 were added in July. Yet many sellers are recording offers almost as soon they list.

Since April homes have been on the market a median of 84 days, according to the MLS.

LAND SALES. A record 140 tracts of land worth $12.29 million were sold in September. That surpassed the then-record 116 tracts sold in July.

All four counties reported records for land plots sold within a month, led by Watauga County where 50 tracts sold for $3.75 million. Ashe County recorded 39 land listings sold for $2.83 million, followed by Avery County (25 for $3.84 million) and Alleghany (16 for $1.08 million).

COMMERCIAL SALES. There were three commercial transactions worth $760,000 recorded in the MLS in September. One was in Watauga County for $500,000 and another in Ashe County for $80,000. The other was recorded outside the four-county area.

ALLEGHANY COUNTY. There were 35 homes sold for $8.19 million in the county, the most recorded in at least 15 years. It’s the second consecutive month 30 or more homes were sold.

ASHE COUNTY. REALTORS® sold 62 homes worth $17.73 million. It was the second consecutive month more than 60 homes were sold. The median sold price for the month was $272,000.

AVERY COUNTY. REALTORS® sold a record 115 homes worth $46.19 million. That was the first time in at least 15 years sales surpassed 100 in a month. The previous high was 96 homes, sold in July.

INTEREST RATES. Mortgage rates remain near record lows. The average 30-year fixed rates was 2.88 percent as of Sept. 30, according to loan giant Freddie Mac. The rate has remained below 3 percent since the end of July. It was 3.57 percent a year ago. 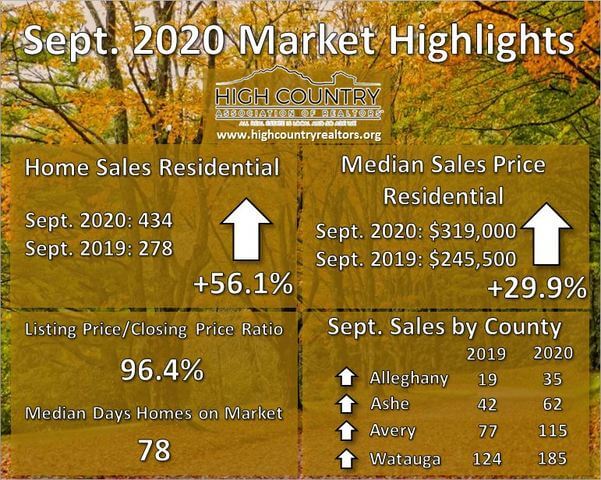 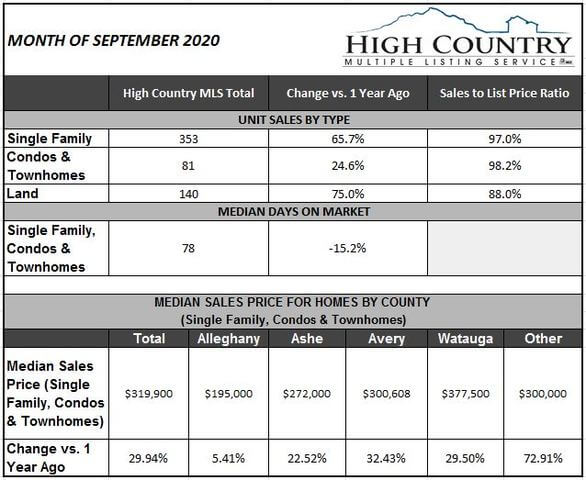