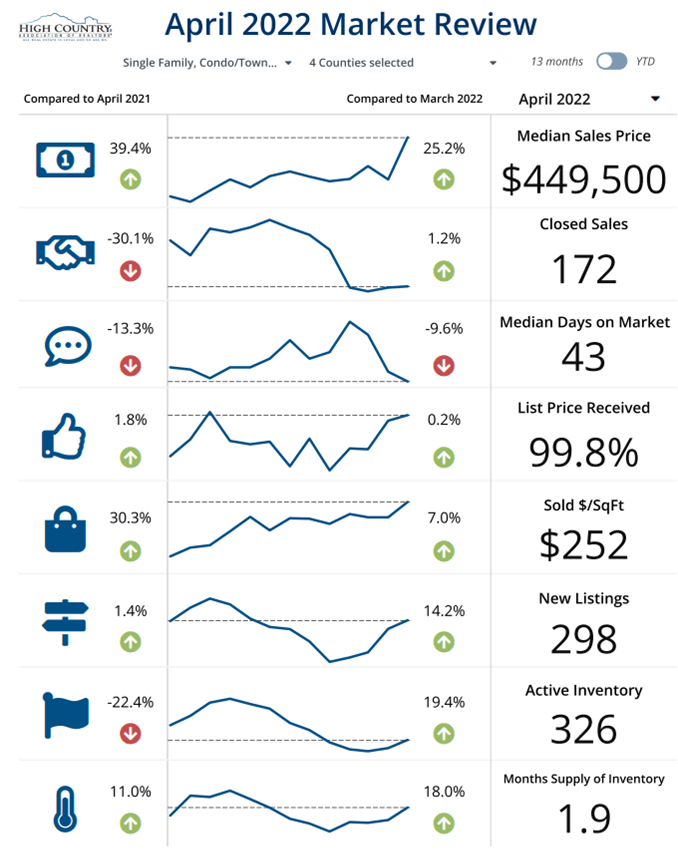 The four-county region, comprised specifically of Alleghany, Ashe, Avery, and Watauga counties, recorded 172 homes sold last month worth a combined total of over $91 million. This is a 15 percent decrease in sales volume compared to last year when 247 homes sold for over $ 107 million. The median sold price for the month of April of this year was $449,500, a 38 percent increase versus April of 2021 which was recorded at $325,000. Sellers of High Country properties received an average of 100% of the list price this April.

A recently released report by economic data manager and analyst Sabrina Speianu from Realtor.com® explains how housing data looks from the national stage; “housing remains expensive and fast-paced with the [national] median asking price at a new high while time-on-the-market is at a new low. The April national median listing price for active listings was $425,000, up 14.2% compared to last year and up 32.4% compared to April 2020”.

INVENTORY. The MLS reports 360 homes listed for the month of April, while the High Country counties, more specifically Alleghany, Ashe, Avery, and Watauga, report 326 homes listed in active inventory for the month. Last April the inventory count was recorded at 350. Sabrina Speianu and Danielle Hale from Realtor.com’s Monthly Housing Market Trends Report explain that “although inventory is closer to catching up with last year, home shoppers are still contending with fewer homes for sale. The national inventory of active listings declined by 12.2% over last year, while the total inventory of unsold homes, including pending listings, declined by 10.7%. The inventory of active listings was down 60.1% compared to 2020 right at the onset of the COVID-19 pandemic. In other words, for every 5 homes available for sale in the earlier period, today there are just 2.

COMMERCIAL SALES. The 3 recorded commercial sales in Alleghany, Ashe, Avery, and Watauga totaled $845,000 in April. The properties combined saw a 98 percent sale price to list price ratio. There was 1 commercial sale recorded in the MLS located in an area other than the four High Country counties. The outside property sold for $3 million.

INTEREST RATES. The average 30-year fixed has hit 5.27 percent, a rate not seen since 2009. The information posted online per Freddie Mac indicates that housing affordability and inflation will likely cause a deceleration in housing price growth over the coming months.

Disclaimer: Figures are based on information from High Country Multiple Listing Service. Data is for informational purposes only and may not be completely accurate due to MLS reporting processes. This data reflects a specific point in time and cannot be used in perpetuity due to the fluctuating nature of markets.

Report graphics generated from Domus Analytics pulled from the HCAR RETS feed. HCAR Realtor® members can access these detailed and customizable reports and graphics for professional use by logging into the HCAR dashboard - Info Hub and clicking on the Resources tab, then the HCAR stats link. A public graphic is available on our website homepage at highcountryrealtors.org.