Skip to content
BOONE - Housing inventory increased for the second consecutive month in May as total unit sales in the four-county area broke 1,000, a record pace according to the High Country Association of REALTORS© monthly sales report.

A hectic spring buying season was evidenced by the sale of 1,213 homes worth $515.33 million so far this year, a 35 percent increase in unit sales compared to the first five months of 2019. (The onset of the COVID-19 pandemic impacted sales last year, though REALTORS© still sold 815 homes for $250.73 million).

Another impressive metric is how fast homes are selling. In May alone, homes were on the market a median of just 49 days, the fastest turnaround recorded for a month within the High Country Multiple Listing Service (MLS).

For the year so far, homes have sold in a median of 59 days. Last year, through the first five months of 2020, homes were on the market a median of 100 days prior to selling.

The spikes in value are attributable in part to the continued demand for homes priced over $1 million. In May, 18 such homes were sold in the region; two of which went for more than $2 million. So far this year 75 homes have sold for $1 million or more.

As REALTORS© prepare for the start of the traditional busy summer selling season, June opened with about 488 homes listed for sale in Alleghany, Ashe, Avery and Watauga counties. That is an increase from the 416 listed a month prior. There were 350 active listings in early April.

A year ago approximately 1,160 homes were for sale in the area.

LAND. There were 145 tracts of land sold for $14.56 million in May, a slight increase from the month prior.

There were 59 land listings sold for $5.5 million in Watauga County. Ashe County had the second most with 35 tracts sold for $3.23 million, followed by Avery County with 16 for $2.44 million and Alleghany County with 22 for $2.353 million. Another 13 listings were sold just outside the four-county-area for a combined $1.04 million.

COMMERCIAL. There were three commercial properties sold last month by REALTORS© for a combined $1.67 million. One was in Watauga County for $1.35 million, according to the MLS. The other two were in Alleghany County for a combined $320,000.

ALLEGHANY COUNTY. REALTORS© have already sold 120 homes in the county this year, double what they sold this time last year (60). In May, there were 19 homes sold for $5.42 million.

INTEREST RATES. The average 30-year mortgage rate was 2.96 percent as of June 10, according to loan giant Freddie Mac. After briefly sugaring in early April, the rate has been 3 percent or less since April 22. 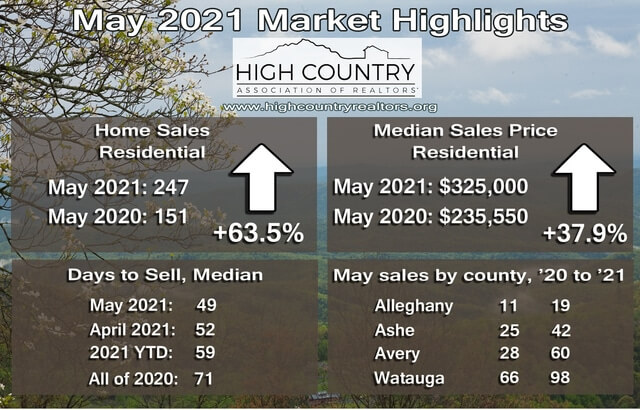 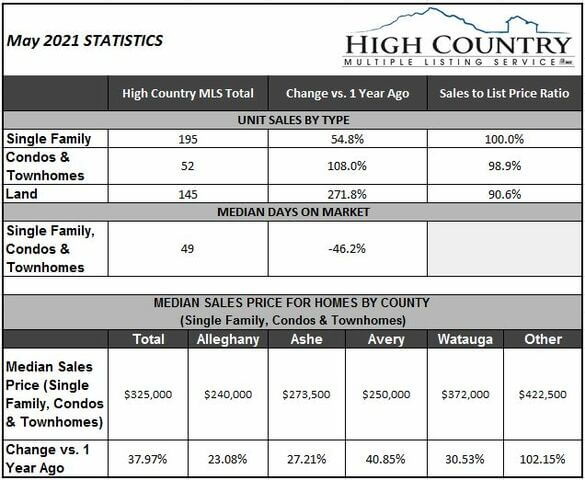