Four months into the year home sales in the region are up 44 percent compared to a year ago, according to the latest real estate report by the High Country Association of REALTORS©.

The number of single-family homes sold in April was a record for the month as sellers received almost 100 percent of their asking price. Land sales also remained strong.

In April REALTORS© active in Alleghany, Ashe, Avery and Watauga counties sold 267 homes worth $107.56 million. That’s an increase in unit sales of 105 percent over last April. Sales for that month were impacted by the onset of the COVID-19 pandemic.

The median sold price has risen in large part due to the demand for seven-figure homes. So far this year REALTORS© have sold 42 homes for more than $1 million; 11 for more than $2 million. In April alone 15 homes were sold for $1 million or more.

Sellers are also getting their asking price. In April the closing price to sales price ratio for homes sold was 99.3 percent, the highest recorded for a month within the MLS. It was 98.9 percent the month prior.

The demand for homes was finally outpaced by new supply in April as inventory grew for the first time in almost a year. As of May 9 there were approximately 432 active listings within the High Country Multiple Listing Service (MLS), which records all REALTOR© activity in the four-county area. That was an increase from a month prior when about 350 homes were for sale.

A year ago almost 1,190 residential listings were active within the MLS.

Two others were sold outside the four-county area.

Fourteen tracts outside the four-county area were sold for a combined $1.24 million by High Country REALTORS©.

ALLEGHANY COUNTY. REALTORS© sold 36 homes worth $9.44 million in Alleghany County. That was the most homes sold there within a month since at least 2009, as recorded by the MLS. The median sold price was $228,750.

INTEREST RATES. Mortgage rates remained under three percent for three consecutive weeks heading into May, according to loan giant Freddie Mac. The average 30-year fixed rate was 2.96 percent as of May 6.

After hitting 3.1 percent in early April, the average 30-year rate has since declined week to week. 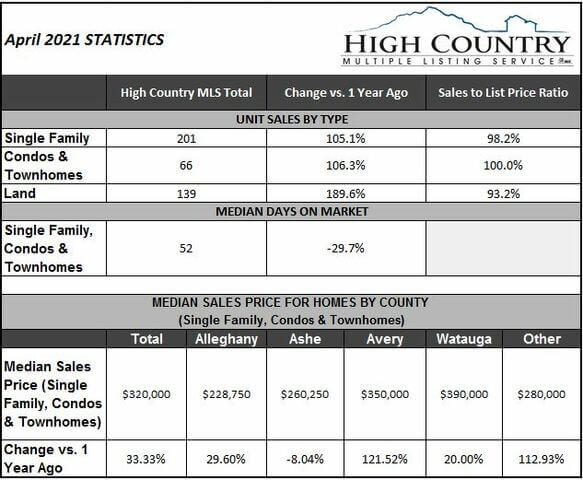