All four counties in the area recorded double-digit growth in home sales compared to the first quarter of 2020, as recorded in the High Country Multiple Listing Service. It tracks all sales activity by REALTORS active in Alleghany, Ashe, Avery and Watauga counties.

Overall land sales are up almost 150 percent, and even commercial activity is increasing.

Through the first three months of 2021, local REALTORS sold 694 homes worth $301.32 million. That’s an increase in unit sales of 29 percent compared to the first quarter of 2020, when REALTORS sold 534 homes worth $167.6 million (The onset of the COVID-19 pandemic reduced potential sales in the final weeks of March).

That demand is reflected in overall home sales. Last month REALTORS set a unit sales record for March when they sold 270 homes for $113.52 million. The previous unit sales high for the month was just 190, set in March 2019.

Sales continue to outpace new supply. As of April 7 there were 350 homes listed for sale in the four-county area. That is the 13th consecutive month inventory has dropped month-to-month. Homes which sold during March were on the market a median of only 57 days.

COMMERCIAL SALES. Sales of commercial property are also up for the year. REALTORS have sold 15 commercial listings for $6.55 million. That is half the unit sales of all of 2020.

Four of the latest listings were sold in March, two of which were sold in Avery County for $405,000. The other two were sold outside the four-county area.

INTEREST RATES. The average 30-year fixed rate is on the rise, hitting 3.18 percent as of April 1. The rate was 2.73 percent a month ago. 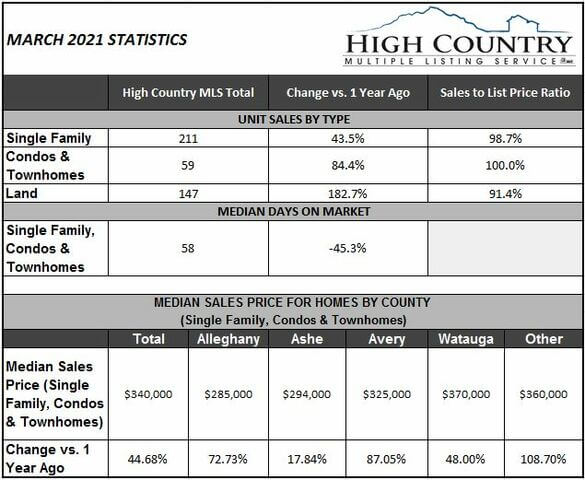 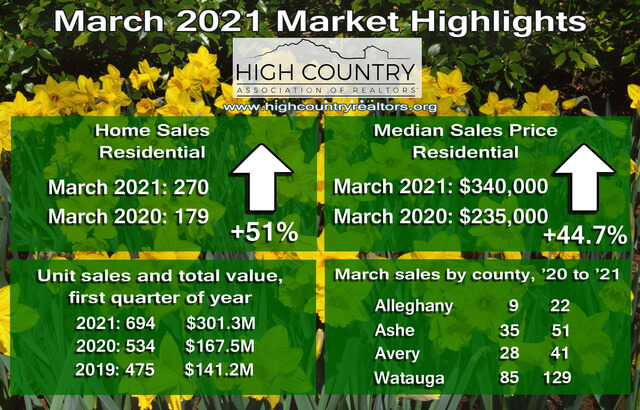