Housing inventory remains at a record low in the High Country area as homes continue to be purchased almost as soon as they are listed, according to the latest real estate report by the High Country Association of REALTORS©.

REALTORS© sold 182 homes worth $91.4 million in February. That’s a 5 percent increase in unit sales compared to last February, the month prior to the shutdown of North Carolina due to the COVID-19 pandemic.

Since that time home sales in the High Country have been furious and inventory has been unable to keep pace with demand. In early April 2020 just over 1,200 homes were listed for sale on the High Country Multiple Listing service. That number has fallen every month since.

As of March 8 there were approximately 364 homes for sale in the four-county area, the lowest inventory total on record.

"There is unprecedented demand for High Country homes right now. Many new listings are attracting offers over the asking prices," said Shyllene Fecteau, President of the High Country MLS. "Local REALTORS© are crucial now more than ever to ensuring sellers are listing their properties to best take advantage of current market conditions and helping buyers to navigate the process."

The demand is reflected by the selling prices. According to the MLS, during the first two months of the new year High Country homes sold for 97.5 percent of the original asking price.  A year ago that statistic was 95 percent; five years prior it was 92.6 percent.

The listing to sell price ratio varies by county. In Watauga County, homes are selling for 98.5 percent of the list price. It is 97.4 percent in Ashe County, 96.4 percent in Alleghany County and 96.1 percent in Avery County.

LAND SALES. REALTORS© sold 124 tracts of land for $11.38 million in February, a substantial increase compared to February a year ago (47 listings for $5.17 million).

COMMERCIAL LISTINGS. REALTORS© sold seven commercial properties for $4.3 million in February, the most sold within a month since October.

Three of the lists were located in Watauga County and sold for a combined $1.93 million. There were two listings sold in Avery County ($2.17 million) and two sold in Ashe County ($207,400).

There were 22 new listings within the county added to the MLS during the month.

There were 39 new listings within the county added to the MLS during the month, the most since October.

There were 32 new listings within the county added to the MLS during the month.

WATAUGA COUNTY. There were 85 homes sold for $57.19 million in Watauga County, with 10 of them selling for more than $1 million. Of those, half were for $2 million or more. The high-dollar homes sales pushed the median sold price to $441,000 for the month.

There were 114 new listings within the county added to the MLS during the month, the most since November.

INTEREST RATES. Mortgage rates have been on the rise since the start of the year, but remain near historic lows. The average 30-year fixed mortgage rate hit 3.02 percent March 4, as reported by loan giant Freddie Mac. That is up from 2.73 percent a month prior. Rates were last this high in early July 2020.

“Since reaching a low point in January, mortgage rates have risen by more than 30 basis points, and the impact on purchase demand has been noticeable,” said Freddie Mac in a press release. “The rise in mortgage rates over the next couple of months is likely to be more muted in comparison to the last few weeks, and we expect a strong spring sales season.” 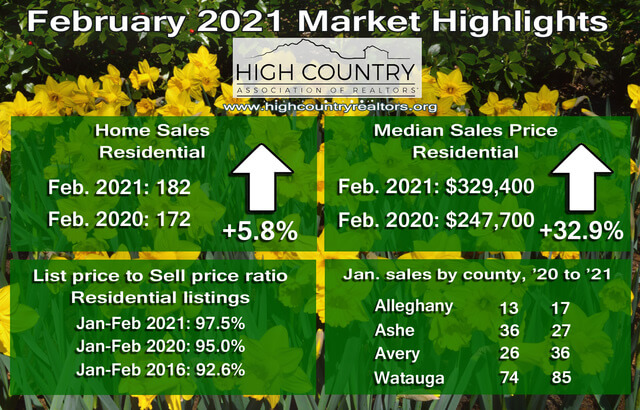 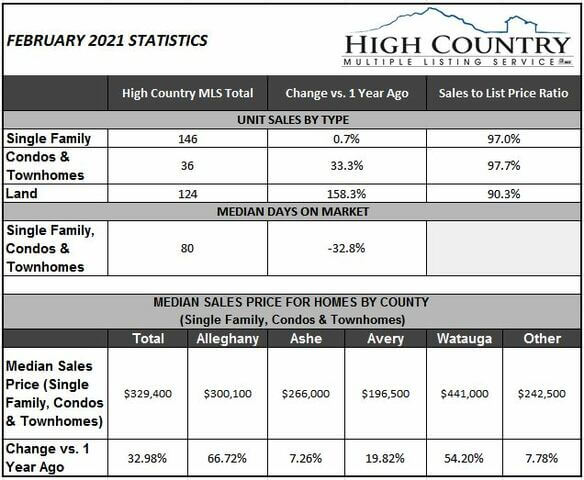