After a record setting 2020, High Country home sales remained robust going into the new year. The median sold price was especially strong, hitting the highest mark ever recorded in a month.

There were 237 homes worth $94.88 million sold by REALTORS® in January, the most ever sold during the month. That’s according to the High Country Multiple Listing Service. It records all REALTOR® transactions in Alleghany, Ashe, Avery and Watauga counties dating back to 2005.

It was the eighth consecutive month in which more than 230 homes were sold by REALTORS® in the four-county area. That’s the longest such streak ever recorded in the MLS.

The high demand continues to impact supply with about 420 homes listed for sale as of February 5. According to the MLS, 200 new listings were added in January. That was an increase from December (163) but below January 2020 (241).

COMMERCIAL SALES. REALTORS® recorded four commercial sales in January, two of which were outside the four-county area. They were worth a combined $1.13 million.

LAND SALES. There were 95 tracts of land sold for $7.18 million by High Country REALTORS® last month. It was the first time since July sales for a month were below 100.

ALLEGHANY COUNTY. There were 24 homes worth $6.68 million sold by REALTORS®, more than double how many were sold last January (11 for $2.3 million). The median sold price for the month was $281,250, the highest recorded for any month since at least 2005.

ASHE COUNTY. REALTORS® sold 49 homes worth $16.61 million during the month. It was the seventh consecutive month sales surpassed 40 units. The median sold price was $325,000, the highest recorded since at least 2005.

WATAUGA COUNTY. There were 208 homes sold for $85 million in January. It was the seventh consecutive month more than 200 homes were sold. The median sold price was $372,000.

INTEREST RATES. The average 30-year fixed mortgage rate remains near record lows, according to loan giant Freddie Mac. The average rate was 2.73 percent as of Feb. 4, a decrease from the week prior and about where it was in early November (2.72 percent).

“Mortgage rates remained flat this week and near record lows, signifying an economy that continues to struggle,” said a press release from Freddie Mac. “This rate environment is advantageous for those who are looking to refinance in order to strengthen their financial position.” 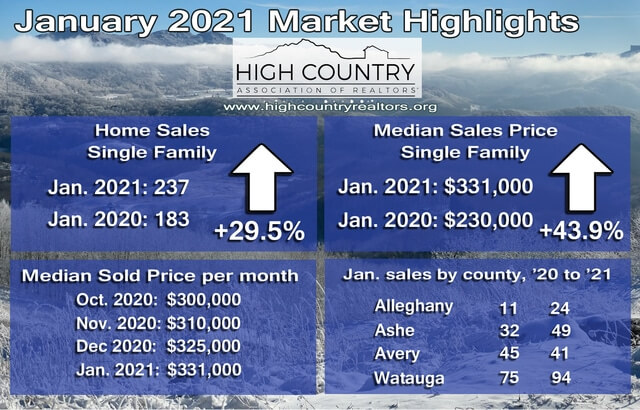 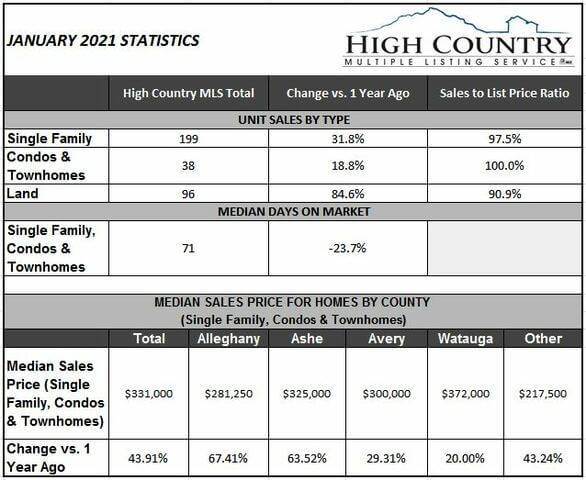