In a year of milestones for High Country real estate sales local REALTORS® recently eclipsed a new one - the $1 billion sales mark.

Through the end of November High Country REALTORS® sold a record 2,960 residential homes worth $1.06 billion. That’s a 43 percent increase from 2019 and double the sales from 2017, according to the latest real estate report from the High Country Association of REALTORS.

The value was boosted in great part by the sale of million-dollar properties. There have been 134 such homes sold in the four-county area this year; 19 for more than $2 million. That’s according to the High Country Multiple Listing Service (MLS) which tracks sales from REALTORS® active in Alleghany, Ashe, Avery and Watauga counties.

While the national pandemic slowed sales earlier in the year, demand has held steady since last spring. Since July REALTORS® have sold more than 320 homes each month, the longest such streak on record.

Demand continues to outpace inventory. As of December 9 there were about 570 homes for sale in the region. That’s the fewest available for sale in several years.

LAND AND COMMERCIAL SALES. Land sales remained brisk in November as 157 tracts sold for $15.77 million. It was the fifth consecutive month of more than 100 land listings sold.

There were two commercial transactions in the region in November. Both were in Avery County for a combined $774,000.

ALLEGHANY COUNTY. There were 19 homes worth $3.55 million sold in November. It was the sixth consecutive month more than 18 homes have sold in the county. The median sold price for the month was $160,000.

WATAUGA COUNTY. REALTORS® sold 152 homes worth $69 million in November. It was the fifth consecutive month more than 150 homes were sold. The median sold price was $357,500.

For the year, there have been 1,293 homes sold for $528.47 million in Watauga County. That’s half of all sales value in the four-county region.

INTEREST RATES. Mortgage rates continue to dig deeper in the basement. Another record low was recorded December 10 when the average 30-year rate hit 2.71 percent. It was 3.73 percent a year ago. 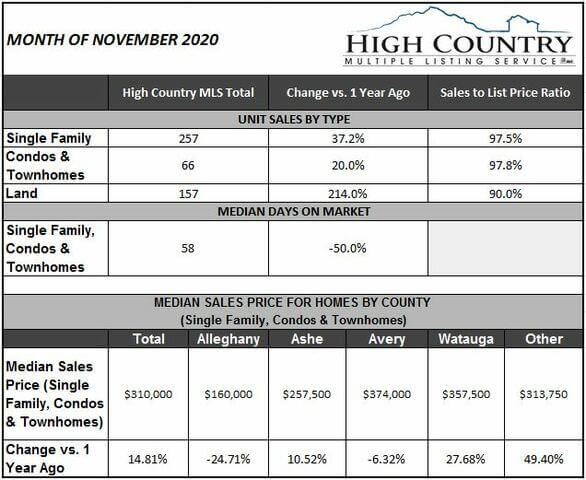