In 2019, High Country REALTORS® sold a record number of homes in a year. They surpassed that mark with two months still to go in 2020, according to the latest monthly real estate report by the High Country Association of REALTORS®.

In October, REALTORS® sold 414 residential listings worth $166.7 million. It was the second consecutive month - and only the second time ever - regional homes sales broke the 400 mark.

About 375 new listings were added to the market in October, but the supply couldn’t keep pace with demand. As of October 4 about 640 homes were for sale in the High Country Multiple Listing Service (MLS). That’s almost half the inventory active at the start of the year and more than 860 fewer than were for sale this time a year ago.

LAND SALES. Land sales hit a record high for the fourth consecutive month after 182 tracts sold for $17.31 million in October. That was a 26 percent increase in unit sales from the month prior.

ALLEGHANY COUNTY. There were 29 homes worth $6.19 million sold in October, bringing to 200 the number of homes sold so far this year. There were 176 homes sold all of last year.

The median sold price in October was $214,500, the highest recorded for any month this year.

ASHE COUNTY. There were 87 homes worth $23.8 million sold in Ashe County in October. It was the third consecutive month more than 60 homes were sold in the county.

AVERY COUNTY. A month after hitting a record high in monthly unit sales (177), REALTORS® sold 89 homes worth $49.32 million in October, It was the fourth consecutive month unit sales surpassed 84.

The median sold price was $387,800, a record high for a month. Fifteen of the homes sold were for more than $1 million.

WATAUGA COUNTY. REALTORS® sold 171 homes worth $77.22 million in October. It was the fourth consecutive month 160 or more homes were sold in the county. The median sold price was $349,900.

INTEREST RATES. The average 30-year fixed mortgage rate dropped to 2.78 percent November 5, the 12th time this year it hit a historic low. It then increased the next week to 2.84 percent.

The rate had been in steady decline since early March.

“Despite this rise, mortgage rates remain about a percentage point below a year ago and the low rate environment is supportive of both purchase and refinance demand,” said Freddie Mac in a press release. 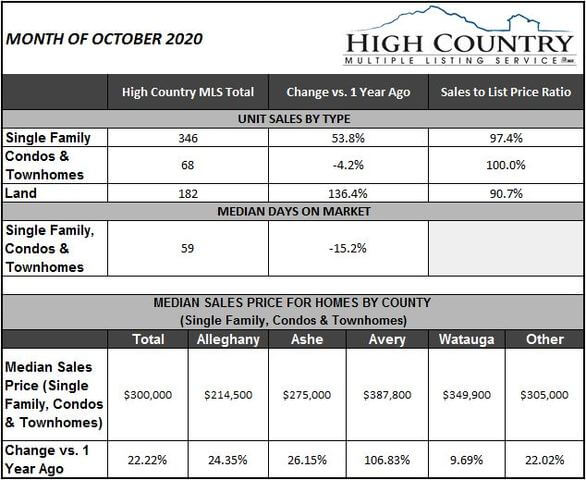 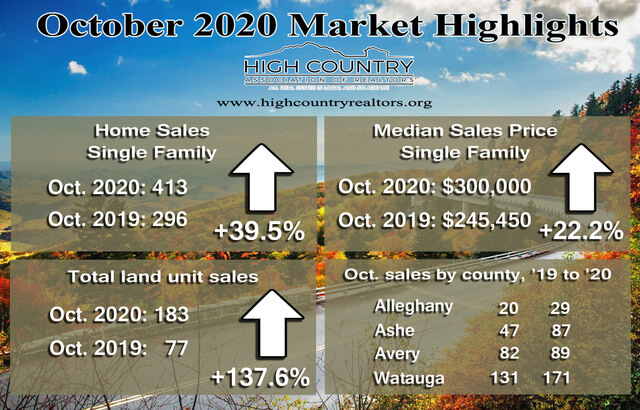