The new year started with brisk sales for local Realtors, as home purchases in January were up 27 percent compared to a year ago. That’s according to the latest real estate sales report by the High Country Association of Realtors (HCAR).

The transactions occurred as buyers took advantage of declining interest rates. They’ve fallen sharply every week but one so far this year. Going into February the average 30-year fixed rate is matching levels last seen in mid-2016. It was 3.45 percent as of February 6.

As is usual for the start of a year, inventory is tight. There were 1,160 active listings within the MLS on February 10. There were just over 1,400 a year ago.

There were 265 new listings added in January.

COMMERCIAL AND LAND. There were 51 land transactions worth $4.39 million in January. That was the fewest tracts sold since last June when 45 were purchased for $5.7 million.

There were no commercial property sales in the four-county area last month. High Country Realtors did record two such transactions outside the area for $705,260.

There were 128 active listings within the county as of February 10.

ASHE COUNTY. Realtors sold slightly more homes than a year ago, and at higher prices.

There were 194 active listings as of February 10.

AVERY COUNTY. The number of homes sold in Avery County last month was more than double from a year prior. Realtors sold 45 listings worth $13.8 million. That was well above the 23 listings sold for $7.35 million in January 2019.

There were 277 active listings in Avery County as of February 10.

WATAUGA COUNTY. There were 75 homes sold worth $32.46 million last month, only slightly more than last year when Realtors then sold 70 homes worth $19.4 million.

There were 410 active listings in the county as of February 10.

INTEREST RATES. Mortgage rates continued a 14-month decline in February, dropping to the lowest levels in more than three years.

As of February 6, the average 30-year fixed mortgage rate was 3.45 percent, according to loan giant Freddie Mac. It was 4.94 percent a little over a year ago, in November 2018.

As of October 31, the average 30-year rate was 3.78 percent. It has fallen or held steady almost every week since. 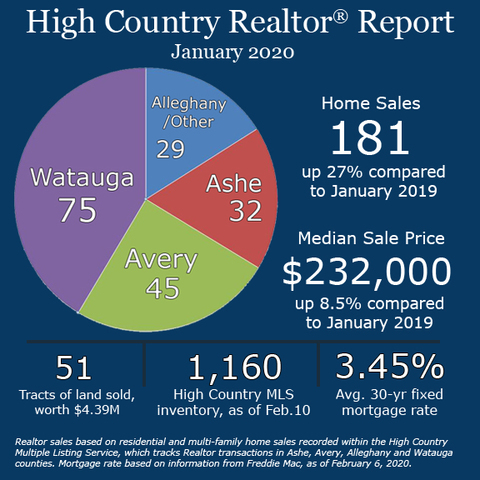