Home sales for the year peak in October

The busy summer selling season has yet to end for local Realtors, with sales in October at a 14-month high.

It was the third consecutive month of near-record sales for members of the High Country Association of Realtors, which represents real estate professionals in Alleghany, Ashe, Avery and Watauga counties. They sold more homes in August, September and October than all but one other month since 2005.

The median sold price in each of those three months - the price point at which half of all homes sold above or below - was above $240,000. That’s according to the High Country Multiple Listing Service (MLS).

Going back to May, local Realtors have sold more than 200 homes each month, peaking in October when they sold 290 residential and multi-family homes worth $86.12 million. Dating back to 2005, only in August 2018 have Realtors sold as many homes in a month (295).

The October activity followed 277 and 285 homes sold in August and September, respectively.

The year-long trend of seven-figure home sales continued, with nine homes selling for more than $1 million. It brought to 69 the number of million dollar homes sold this year. There were 39 all of last year.

Overall, with two months remaining in the calendar year, local Realtors have sold 2,163 homes worth $573 million. The median sold price was $239,000, an increase of 5 percent compared to last year.

As of November 7, there were 1,500 residential listings active on the High Country MLS. That is down from 1,650 a month prior. There were approximately 1,800 active listings a year ago at this time.

LAND SALES. Land sales followed the trend of home sales, with 75 tracts selling for $5.8 million in the four-county area. That was the second most sales in a month since 2005. Only the month prior, September 2019, had more sales, when 80 sold for $9.2 million.

There were four commercial transactions in the area for October. The total value was $1.3 million.

ASHE COUNTY. Sales hit a two-year high in Ashe County, with 47 homes sold for $10.86 million during the month. The median sold price was $218,000. That was the most homes sold in the county by Realtors since July 2017 (48).
Realtors have sold 337 homes so far this year, an increase of 8 percent from last year.

AVERY COUNTY. Realtors sold the most homes in October than they have in any month since at least 2005. There were 78 listings sold for $21.32 million. The median sold price was 185,000.

According to loan giant Freddie Mac, the average 30-year fixed rate was 3.57 percent as of October. It increased for four consecutive weeks before falling to 3.69 percent as of November 7. 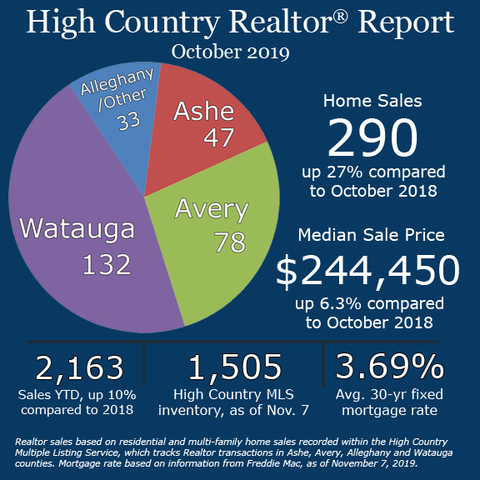