Local Realtors sold more homes in August and September than any two-month period in at least 15 years, according to the latest real estate report by the High Country Association of Realtors.

Through the end of September Realtors sold 1,859 residential and multi-family homes worth $572.06 million, according to the High Country Multiple Listing Service (MLS). It records all activity by Realtors located in Ashe, Alleghany, Avery and Watauga counties.

Forty percent of the homes sold through September were closed within the third quarter, the apex of the busy summer season. From July to the end of September Realtors sold 767 homes worth $241.78 million.

August and September sales were individually the highest for all but one month in the past 15 years as Realtors sold 279 and 274 homes respectively. Only August 2018 was busier, with 295 homes sold.

INVENTORY. There were 1,657 homes for sale as of October 7, according to the MLS. There were just over 300 new listings added during September.

Inventory is tight given recent history. A year ago there was approximately 1,970 homes on the market. There were about 2,722 active listings in early October 2016.

One aspect of current market conditions is the quick pace at which they are selling. In September 2016 listings were on the market a median of 139 days. Last month that median was just 96 days.

From May to the end of September, the median days on market (DOM) was 85, the quickest turnover for listings in a five-month span since 2010.

ALLEGHANY COUNTY. Realtors sold 19 homes worth $3.5 million in September, matching a high for the year. The median sold price in September was $185,000.

ASHE COUNTY. There were 41 homes worth $9.55 million sold in September, bringing to 317 the number of listings sold this year. The median sold price for the month was $217,000.

Listings were on the market for a median of 92 days in September, the second lowest in the four-county region.

AVERY COUNTY. Realtors had the most lucrative month in almost 10 years, selling 75 homes for a combined $28.4 million. That followed an equally busy August, during which another 75 homes worth $24.79 million were sold.

WATAUGA COUNTY. Listings within the county are not available long, as evidenced by a median of just 89 days on the market in September. In June they were on for only a median of 63 days, the quickest turnover for a month in the county since at least 2010. The metric increased to 65 and 77 in July and August, respectively.

Five of the listings sold were for more than $1 million.

INTEREST RATES. Interest rates bumped up briefly in September before declining by the end of the month. The average 30-year fixed rate was 3.65 percent as of October 3, as measured by Freddie Mac. It was 3.73 percent September 19. 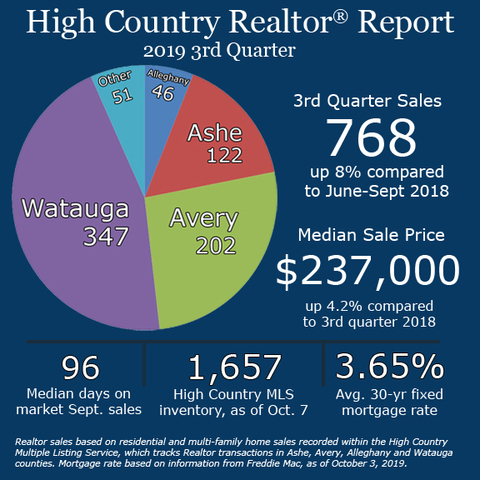