As home sales remained brisk throughout the month of July, local Realtors recorded strong sales in both land and commercial property, according to the latest real estate report by the High Country Association of Realtors.

Local Realtors sold 54 land tracts worth a combined $10.25 million, the highest value recorded in a month in at least nine years. One listing accounted for almost half that value. It was a 7.88-acre site off Shadowline Drive in Boone which sold for a reported $4.875 million.

Even accounting for that one listing, the $5.37 million in other July land sales combined with the 45 land tracts sold in June for $5.72 million represented the highest dollar land transactions recorded in back-to-back months since July and August of 2017 ($11.7 million).

Realtors also sold five commercial listings worth $2.5 million in July, according to the High Country Multiple Listing Service. It tracks all Realtor transactions in Alleghany, Ashe, Avery and Watauga counties.

It was the most commercial listings sold in a month since seven were recorded in April, and the highest combined sales total since last October (seven listings for $2.83 million).

There were approximately 1,770 homes for sale on the MLS, as of August 6.

SELLERS MARKET REMAINS STRONG. The listing price to sales price ratio hit a new high mark for the year, as sellers received 95.4 percent of their original asking price in July.

Three of the four High Country counties recorded a plus-95.5 percent ratio for the month - Alleghany (95.9 percent), Ashe (95.6 percent) and Watauga (97.1 percent).  Sellers in Avery County recorded a 92.7 percent ratio.

AVERY COUNTY. July was the busiest month for both homes and land in almost a year. Realtors sold 51 homes worth $10.522 million, the most homes sold in a month since last August (71). They also sold nine land tracts worth $992,750, the most since last October (10).

For the year an average of 31 homes are being sold by Realtors per month in the county.

Realtors sold 16 tracts of land for $6.8 million, which included the Shadowline Drive property. There were also four commercial listings sold for $2 million.

INTEREST RATES. The average 30-year fixed interest rate is at a two-year low. It was 3.75 percent as of August 1, according to loan giant Freddie Mac. The rate has remained below 4 percent since the end of May. 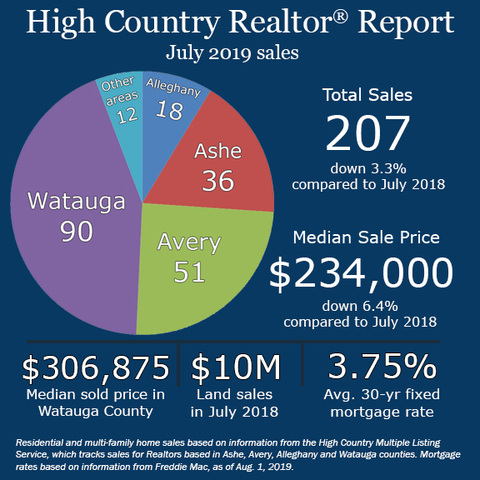