Local real estate activity through the first half of 2019 continued to show signs of a strong sellers’ market, according to the latest sales report from the High Country Association of Realtors.

More than 1,000 homes were sold from January to June by Realtors active in Alleghany, Ashe, Avery and Watauga counties. The median sold price for all homes sold continued to rise. Inventory has grown. And interest rates fell steadily through the year.

According to the New York Times, the Federal Reserve Board is considering a possible interest rate drop in the near future. That would increase affordability for local buyers as a counter to increasing sales prices.

In the first half of the year, High Country Realtors sold 1,091 residential and multi-family homes worth $326.55 million, according to the High Country Multiple Listing Service (MLS). It records Realtor activity in the four-county area.

New listings continue to be added to the market. There were approximately 1,810 active homes for sale on the MLS as of July 12. Almost 946 have been added since early May.

INTEREST RATES KEEP FALLING. Since approaching 5 percent back in November, the average 30-year fixed interest rate has dropped significantly. It was 3.75 percent as of July 11, according to loan giant Freddie Mac.

The 16 homes sold in June were the most for that month in three years. Last June three homes were sold. Only eight were sold in June 2017.

ASHE COUNTY SALES. The 195 homes sold in Ashe County in the first half of 2019 were just slightly ahead of last year’s sales pace, when Realtors sold 191 listings.

June activity was the lightest since January, with 27 homes sold. More than 30 had been sold each month from February to May.

AVERY COUNTY SALES. The 38 homes sold for $12.3 million in June were a high for the year, and the busiest month since last November (46). Yet overall sales are down year to year.

WATAUGA COUNTY SALES. An average of 93 homes were sold each month through the first half of the year, totaling 555. To give the activity some perspective, Realtors averaged only 83 homes sold a month in that time span last year, and 74 homes the year prior.

MILLION DOLLAR SALES. In the first six months of the year local Realtors sold 32 homes worth more than a million dollars. That was more than double the number of such homes sold at this time last year (13). 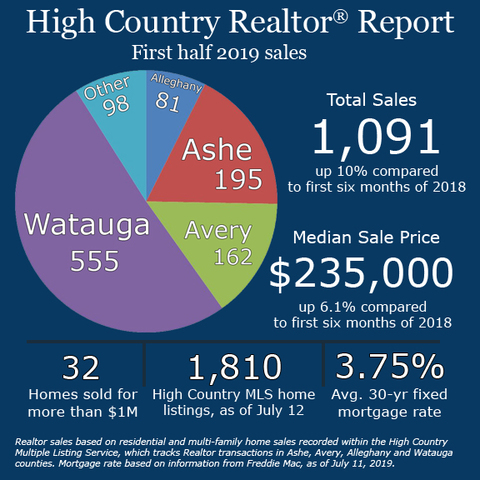