The area’s housing market in May continued its shift to the benefit of sellers as the busy summer selling season got off to a strong start, according to the High Country Association of Realtors® monthly rest estate report.

Sales prices continued to increase, both in median sales price and price per square foot. Sellers also received more of what they were asking for at closing, with the listing price to sales price ratio the highest recorded for a month in at least three years.

Local Realtors® sold 235 homes worth $71.79 million in May, according to the High Country Multiple Listing Service (MLS). It tracks the sales activity of all member Realtors® located in Alleghany, Ashe, Avery and Watauga counties.

It was the busiest May for local Realtors® in more than 13 years, with sales up 18.7 percent compared to last May (198 homes sold). It was also the busiest overall month since last August (295).

The region’s median sold price - the midpoint price at which half of all listings sold either above or below - was $250,000. That was the highest median sales price for a month since last July.

MLS data for the month provides further evidence the area is in a sellers’ market. Two metrics - the average listing price per square foot and original listing price to final sales price ratio - were the highest recorded for any month since at least January 2016.

The original listing price to final sales price ratio for May was 94.9 percent, the second consecutive month it was above 94.3 percent. At that ratio, the $342,000 home cited above would have sold in May for $324,558.

The high listing to sales price ratio coupled with the median sold price in May suggests sellers’ market conditions within the High Country area.

As of June 6, there were approximately 1,730 active residential and multi-family listings within the MLS.

MORE MILLION DOLLAR HOME SOLD. A notable sales metric grew in May, when Realtors® sold five homes for more than $1 million. That brought to 24 the number of seven-figure properties sold by High Country Realtors® this year. That includes eight for more than $2 million, 14 for more than $1.5 million.

There were just 12 such properties sold in the first five months of last year; 39 total.

Ten of the properties sold this year were located within Watauga County. Another six were within Avery County.

ALLEGHANY COUNTY. Realtors® sold 18 homes worth $3.8 million in May. That was the busiest month for county Realtors® since last May, when 19 homes were sold. The median sold price was $150,000.

There were 173 active listings within the county as of June 6.

ASHE COUNTY. There were 42 homes worth $10.2 million sold in May, the third consecutive month of increase sales. The median sold price was $225,000.

The activity almost matches what was recorded in May of last year, when 41 homes worth $10.6 million was sold. There were 281 active listings within the county as of June 6.

AVERY COUNTY. Sales climbed in May for the fourth consecutive month, when 33 homes worth $12.97 million sold. That matches last year at this time, when 33 homes sold for $10.5 million.

The median sold price was $154,000. There were 455 active listings within the county in early June.

INTEREST RATES. The average 30-year fixed mortgage rate is near a two-year low, dropping to 3.82 percent as of June 6. That’s according to the weekly national survey by loan giant Freddie Mac.

Interest rates have fallen more than a full percent since peaking in November at 4.94 percent. They were last this low in mid-September 2017 (3.83 percent). 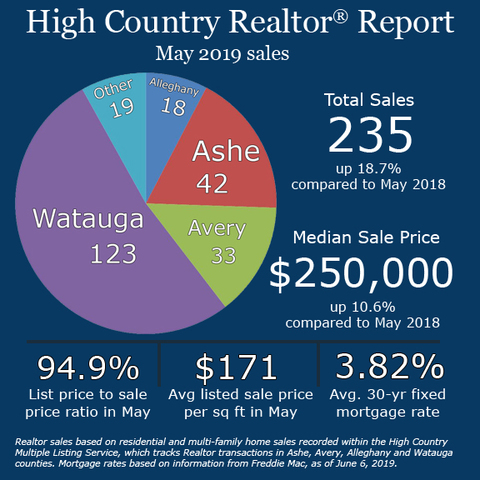