BOONE - Home sales in the NC High Country remained strong in April and outpaced activity a year ago, according to the latest real estate report by the High Country Association of Realtors.

Just over half of the sales activity was in Watauga County, which is seeing a rising trend in sold prices.

Local Realtors sold 173 homes worth $51.5 million in April, according to the High Country Multiple Listing Service (MLS). It records all Realtor activity in Alleghany, Ashe, Avery and Watauga counties.

The median sold price for the region - the midpoint at which half of all homes sold either above or below - was $227,000. That’s almost one percent higher than the median price at this time last year, $224,900.

Sellers are also starting to enter the market en masse. Realtors added 441 new listings to regional inventory in April, the most added in a month since last June (491) and much higher than last April (379). Historically, May tends to the month when the most listings are added for the year, as the busy summer selling season begins in earnest.

As of May 12 there were approximately 1,550 active listings in the MLS.

ALLEGHANY COUNTY. Real estate activity in Alleghany is well above last year at this time, with home sales up 45.2 percent compared to 2018.

Realtors sold 45 homes worth $9.13 million through April, according to the MLS. There were 31 homes total sold this time last year.

There are about 170 active listings in the county.

ASHE COUNTY. Home sales hit a six-month high in April, as Realtors sold 38 Ashe County homes worth $12.5 million. It was the first time since September more than 35 homes were sold.

To put the number in perspective, since January 2018 Realtors have averaged 24 homes sold in the county each month.

Year to date 126 homes have been sold in Ashe, a 17.8 percent increase over last year at this time. There are about 255 active listings in the county.

AVERY COUNTY. Avery County is the only area of the region recording a year-to-year decrease in sales, due in large part to how busy the market was there a year ago.

Through April, Realtors have sold 89 homes in Avery County, matching the total through early 2017. Last year, though, there were 112 homes sold in that span.

There were 26 homes worth $6.04 million in April, down from 28 homes sold in April 2018. There are approximately 418 active listings in the county.

WATAUGA COUNTY. There is evidence prices are rising in Watauga County, as the median sold price so far this year is up 11.6 percent compared to last year.

In April, there were 87 homes sold worth $28 million. There are about 570 listings active within the county.

INTEREST RATES RETREAT. After slowly climbing through April interest rates turned down in early May. As of May 9, the average 30-year fixed mortgage rate was 4.10, down from 4.2 percent at the end of April. The rate was 4.55 percent a year ago. 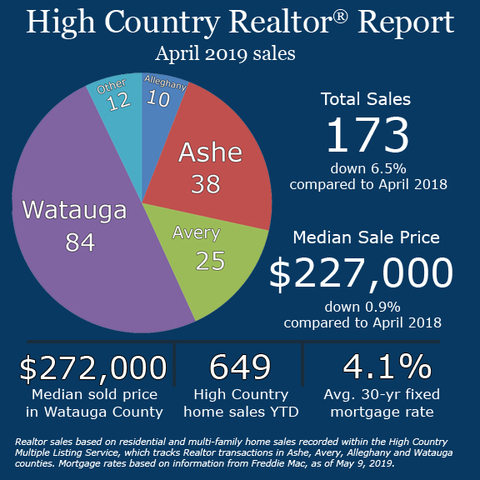