The local real estate market continues to do brisk business, as sales in the first quarter of 2019 increased for the ninth consecutive year, according to the monthly real estate report by the High County Association of Realtors.

Local Realtors sold 473 homes valued at $141.4 million from January to March, as recorded in the High Country Multiple Listing Service (MLS), which tracks all Realtor activity in Alleghany, Ashe, Avery and Watauga counties.

Sales have increased in the first quarter every year since 2010, when only 146 homes worth $37.17 million were sold.

The median sold price for all homes sold by Realtors in the first three months of the year was $230,000.

Avery County sales were down, dropping 25 percent from last year (63 from 84).

This year’s activity was highlighted by a $5.1 million transaction in Avery County. That is the most expensive home ever purchased listed in the High Country MLS. It was one of three sales of more than $1 million within Avery County. Six other such sales were recorded within Watauga.

FOR THE MONTH OF MARCH. There were 184 homes worth $51.28 million sold by Realtors in March. That was a month-to-month increase of 24 percent from February, and a year-to-year increase of 3.4 percent from March 2018.

MARCH MEDIAN. The median sold price in March - the midpoint price at which half of all homes sold either above or below - was $235,000. That was down from the $245,000 median sold price recorded for the region in February.

INVENTORY UP. Inventory is starting to increase as the busy selling season begins. As of April 8 there were 1,466 active listings within the High Country MLS. That was an increase of almost a 100 from early March, however inventory remains tighter than it was this time last year. There were approximately 1,600 active listings last April.

INTEREST RATES. The average 30-year mortgage rate continues its downward trend. The rate was 4.12 percent as of April 11, according to loan giant Freddie Mac. That’s down almost a full percentage point since mid-November, when the rate was 4.94 percent.

That same house purchased today would have an estimated monthly payment of $969, and a total estimated mortgage of $348,740. 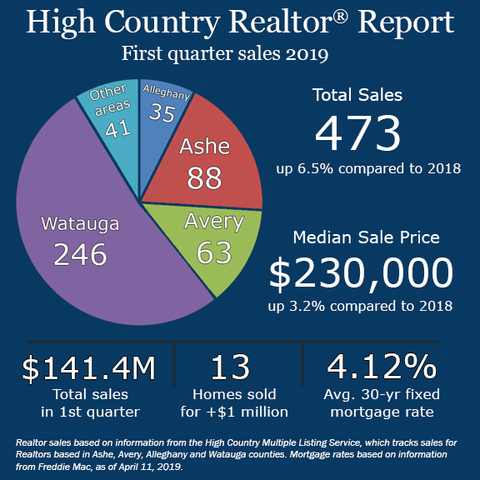